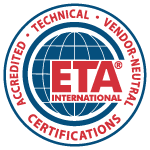 Industry-recognized professionals join a historic group of individuals who have mastered their craft and proudly practiced it while helping others along the way. Nominated by their peers and elected by ETA® International members, these dedicated individuals volunteer to represent ETA and play a vital role in shaping future initiatives for the Association.

Greencastle, February 12, 2021: Congratulations to these professionals on being elected to the ETA International Board of Directors! ETA®

International is proud to have the most respected industry technicians and educators to lead the not-for-profit professional trade association who share the mission to certify today’s technicians in tomorrow’s technologies. ETA Board of Directors includes professionals dedicated to electronics and related industries willing to serve the association with the highest standards of excellence. The volunteers selected to serve ETA International for the 2021 and 2022 calendar years include:

Chairman – Ira Wiesenfeld, CETms(RF) P.E., has been involved with commercial radio systems since 1966. Currently, he is the president and principal engineer at IWA Technical Services Inc. (IWATSI), which provides engineering services and technical training in land mobile radio and paging. Wiesenfeld has served on the ETA Executive Committee as Chairman, Vice-Chairman, Secretary and Treasurer and has played a pivotal role in the development of new ETA certifications, including the WCM, USMSS, FDR/LAS, GCT 1, GCT 2, RFIM and PIM. He was also a major contributor in the development of the FCC GROL currently being used today.

Vice Chairman – William “Bill” Bailey, PhD, began his electronics career when he entered the United States Navy and advanced to become a naval electronics instructor. Upon military retirement, he began teaching math and electronics at ITT Technical Institute, where he became Chair of the School of Electronic Technology, Indianapolis, Indiana campus. Currently, he is an adjunct professor at Embry-Riddle Aeronautical University World Wide Campus

Secretary – Chris Miller, CETsr, is the Electronics and Mechatronics programs Program Coordinator at Heartland Community College in central Illinois, where he created and developed the Renewable Energy and Sustainable Energy Associate degree programs. He is an active Coast Guard Auxiliary member, specializing in communication and emergency preparedness and is a ham radio operator, N9RKD.

Treasurer – William “Bill” Woodward is a consultant with Whitney, Bradley & Brown, Inc. primarily supporting the U.S. Air Force PNT Program Office. Since leaving the U.S. Navy Submarine Force in 1992, he has been developing electronic and electrical equipment for navigation / weapons systems and has sponsored more aerospace fiber optics standards than anyone in the world. Woodward is Chairman of SAE International’s Aerospace Avionics Systems Division and Systems Management Council PNT Committee and has served four terms as chairman of ETA International.

Board of Masters Chair – Joseph Cooper, CETma, CETms(RF, IT), was the senior electronics technician onboard USS Tripoli (LHA 7) where he was responsible for managing the preventive and corrective maintenance of all RADAR, navigation and interior/exterior communication systems as well as the training and development of junior technicians. Completing his 29-year career as an Electronics Technician Master Chief in the U.S. Navy in February 2021, he continues to support his country and work in his area of expertise of shipboard electronics for a defense contractor performing electronics systems management in San Diego, CA.

Cabling Division Chair – Paul Neukam, FOT-OSP, DCI, began his career in the Information and Communications Technology (ICT) field as an estimator and project manager in 1997 as Director of Infrastructure Services for Matrix Integration, where he developed and implemented a technician apprenticeship training program that was approved by the U.S. Department of Labor Bureau of Apprenticeship and Training (BAT) and the Department of Veterans Affairs. He co-founded SiteWise after more than a decade of Information and Communications Technology (ICT) contracting experience, with a networking systems integrator serving the Midwestern United States.

Cruz began his electronics career in 2000 when he received an associate’s degree in Electronics Engineering Technology and then joined the United States Army as a Radio Communications Security Repairer. He currently serves as an Electronic Systems Maintenance Warrant Officer. Over his 20 year career, he conducted repairs and trained soldiers on military communication and electronics equipment, aviation electronics, countermeasure systems, and night vision devices. Currently, Cruz works with industries to test and develop new electronic equipment and is one of the senior electronics personnel for the organization concerning training, personnel, and recruiting.

Sheedy has extensive industry experience which includes installation, troubleshooter, emergency restoration technician design, inspector, consultant, trainer and published author. You can find him still working in the field in many of these capacities. Holding 30 industry certifications, his experience spans the divisions of the military, various government agencies, federal and state prisons, the traditional commercial market as well as the private sector. Based out of Idaho, Sheedy is a senior instructor of fiber optics for Light Brigade.

Certified Technician Division Chair – Shane Morris, CETma, CETms(IT, RF), has over 33 years of experience in the electronics/electrical industry. He has multiple industry certifications including approximately 18 certifications from ETA. Morris has been with Motorola Solutions, Inc. (MSI) for over 24 years, currently serving as a Technical Support Manager within their Field Services Subject Matter Expert (SME) Team. As a member of the SME Team, he plays a major role in developing and disseminating technical standards, guidelines, procedures, and training courses. He is the chairman of the Motorola R56 Standards and Guidelines for Communication Sites committee and has played an instrumental role in the development, maintenance, and updating of the internationally-recognized Motorola manual (R56).

Certified Technician Division Secretary/Treasurer – John Zielinski, CETma, retired after 42 years in the electronics field, mostly as a technician. He spent a few years in the 1970s maintaining radio stations under contract. He worked in contract manufacturing doing testing of finished products and conformal coating in New York during the last few years prior to his retirement.

Communications Division Chair – John Baldwin, CETsr, retired after being involved in electronics and wireless for 39 years, with 28 years teaching electronics and wireless communications. He also served as the instructor designate for the Institute for Wireless Education, where more than 500 wireless professionals received advanced skills. Baldwin served in the U.S. Air Force as a Radio Communications Specialist until he transitioned to EF Johnson, where he was the Technical Support Supervisor and technical instructor of RF products. As a charter member of ETA, Baldwin previously held the executive board positions of Chairman and Treasurer. He received the 2001 ETA Pete Award as well as the 2013 ETA President’s Excellence Award.

Communications Secretary/Treasurer – Jay Thompson, CETsr, is a senior field engineer whose career spans over four decades. He designed and installed the first fuel telemetry system used in Indy Car racing and won an Emmy award for outstanding technical remote video engineering. While installing and servicing public safety two-way radio and paging systems, he has spent the last decade as a communications unit leader for the US Department of Homeland Security and US Department of Health and Human Services - Disaster Medical Assistance Team CA-4.

Education Division Chair – Shirley M. Brown-Harrison is the Electro-Mechanical Technology Senior Instructor, teaches Electronic Systems Program and Telecommunications Technology at the Tennessee Technology Center (TTC) at Hohenwald. She began her career by enrolling in the Industrial Electronics program at the TTC at Hohenwald and furthered her education to earn a Robotics Technician diploma while she was also an assistant Industrial Electronics Instructor. She went to work for Crossville Ceramics in Dickson, TN and became its first female Industrial Maintenance Technician. A few years later, she came back to teach at Tennessee Technology Center and continued her education to earn an A.A.S. from Chattanooga State in Applied Technology. In addition to teaching, she currently serves as a judge and coordinator for the SkillsUSA Electronics Technology Competition.

Renewable Energy Division Chair – Jay Warmke, PV2, SWI, is co-owner of Blue Rock Station, a sustainable living center in Philo, Ohio. Warmke has served as vice president of the board of directors of Green Energy Ohio. In 2015, he was elected to ETA's Board of Directors and for the past five years, has served as Chair of the Renewable Energy Committee. Currently, he serves as instructor in renewable energy at the Central Ohio Technical College and for Marcraft. He is the author of numerous green technology books and volunteers as the national co-chair of the Skills USA Sustainable Solutions contest. He was also named the 2013 ETA Educator of the Year and received the 2017 ETA “Pete” Award as Outstanding Officer/Committee Person.

Shop Division Chair –Terry Zaccarino, CET, has been a member of ETA for 15 years. He is the owner of Communications Electronics of Virginia located in Fairfax County, Virginia. Zaccarino is currently serving as a board member of Certified Service Center, which promotes certification in service shops in technical industries.

Shop Division Secretary/Treasurer – Armando Montiel, CETsr, R56, has been involved in the wireless communications arena since 1977, working on sales, service, design and support of electronic communications equipment, communications sites, communications towers, CCTV surveillance systems, access control, telephony, and networking. Most of these years, he managed his own company in Mexico which provided radio communication and security services to commercial and government areas along the northern border. Currently, he is the general manager and managing partner at RZ Communications Laredo, a Motorola Channel Partner responsible for service and support to all Motorola Public Safety customers in the city of Laredo, Texas and surrounding areas.

Director of Chapter Relations – Richard W. Booth was the Detachment Production Superintendent for Field Training Detachment 211 at Davis-Monthan Air Force Base prior to his retirement. As Detachment 211’s lead instructor, Booth also acted as an intra and interservice liaison for the United States Navy’s Miniature/Microminiature circuit card repair program. Additionally, he oversaw courseware development for 60+ Air Force electronics, avionics and information technology courses. As part of his duties, Booth directed and managed the detachment’s IT department in support of LAN operations and offsite database security. Currently, Booth is the Interactive Digital Media instructor for Empire High School in Tucson, Arizona.

Director of International Relations – Johannes “John” Bakkeren, CETma, CETms(RF), earned his first professional certification as a Certified Electrician and worked as electrician before he was hired as Radio Technician for the Dutch Federal Police. Ten years later, he became Radio Technician at the Toronto Police Service, where he was later promoted to Senior Radio Technician in charge of the mobile radio repair section. He was later hired as Senior Systems Technician with the Peel Regional Police Service radio shop in Ontario where he was responsible for second tier maintenance. He has served as ETA International Chairperson since 2017 and is president of Brampton’s Peel Amateur Radio Club.

About ETA - Celebrating 40+ years of service to the electronics industry, ETA has delivered over 250,000 certification examinations successfully. Widely recognized and frequently used in worker job selection, hiring processes, pay increases, and advancements, ETA certifications are often required as companies bid on contracts. ETA’s certifications are personal and travel with the individual, regardless of employment or status change and measure competencies of persons, not products or vendors. ETA certifications are accredited through the International Certification Accreditation Council (ICAC) and align with the ISO-17024 standard. www.etai.org